The kidless vacation at times is can be a fickle thing! Relaxing and then guilt-ridden, desperately needed, and then self-indulgent, carefree and anxiety-inducing. Leaving our kids in capable hands so we can take those much needed breaks brings with it a roller coaster of emotion. Jenna headed off to a tropical island with her husband recently and wanted to channel some of those feelings into something that would help calm her nerves and express her feelings, while creating something her boys could look forward to each day while she was gone. Here’s what she did: 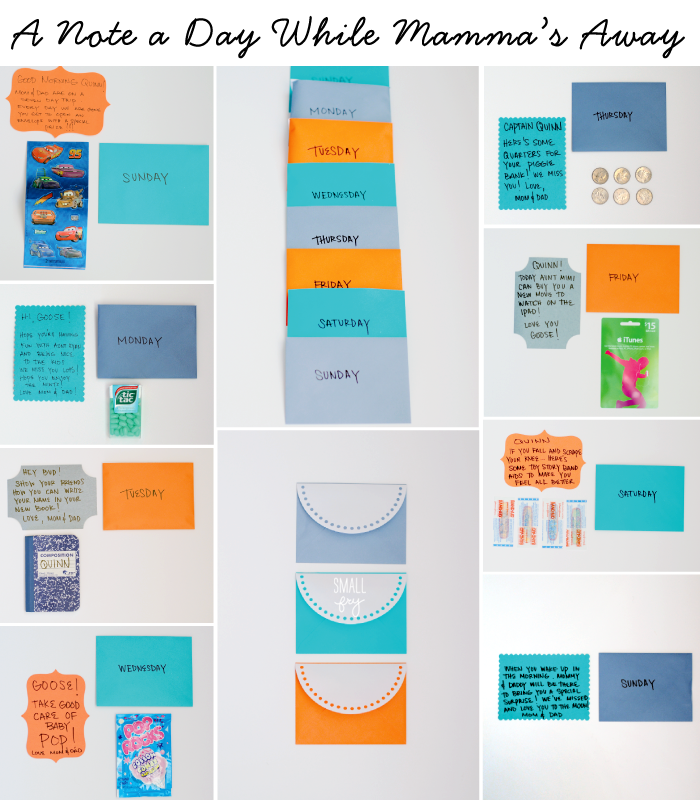 Every day Jenna and Andrew were gone, there was an envelope waiting for their boys. Most were filled with tiny gifts that cost one dollar or less and then there was a couple exciting bigger gifts too. Knowing their son Quinn was practicing writing his name in preschool, so he got a tiny notebook to fill up. A handful of change (which to a three year old is pretty darn cool,) and favorite treats brought so much joy while they were away.  A stack of bandaids so their boys would know they were thinking of them and wished they could be there to kiss any boo boos better. And finally, an iTunes gift card so they could get a brand new movie to watch which not only excites the kids, but also gives the babysitter some valuable leverage! Most importantly it gave Jenna some peace of mind knowing her kids could have a little piece of mom and dad whenever they needed it.