Our NYC trip last month was a whirlwind, and although it’s a departure from our normal Small Fry posts we wanted to recap the trip for those of you who asked for details!

It all started with a red-eye flight. Despite masks, ear plugs and pillows, and a whole lot of effort, none of us could manage to get any sleep. Excitement and those tiny airplane seats got the best of us. 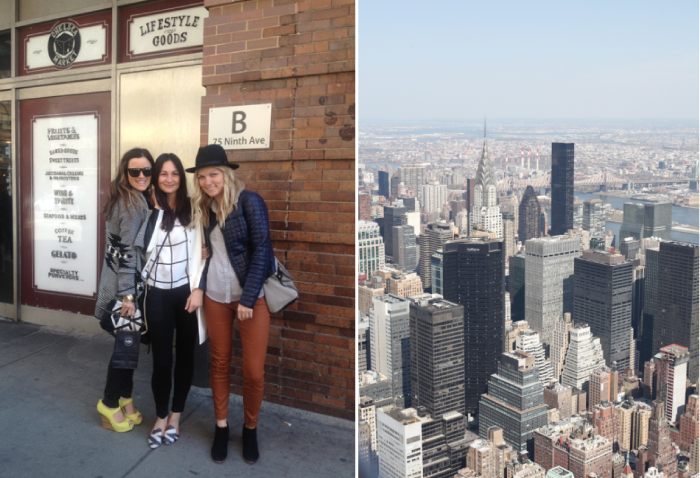 We landed early in the morning and set our bags down and ran out the The Standard Highline hotel doors to our first family film shoot in Central Park. We filmed all morning and into the afternoon, but made no hestiations when we stumbled upon a Magnolia Bakery for Banana Pudding! Then we made our way to Grenwich to film the winners of our family film contest. They were incredible, and it’s killing us to keep it a secret this long! We can’t wait to share their awesome afternoon in the village.

After our second film of the day we hustled back to the Highline to get ready for the Bugaboo + Andy Warhol party! (Check out their party film here.)

No point in resisting the photobooth, is there? We were getting pretty bleary-eyed, but in the city that never sleeps, we weren’t going to either! We had an incredible post-party meal at The Little Owl, if you’re ever there try the Sticky Toffee Pudding.

After thirty-six on-the-go hours we finally fell face first into our hotel beds and didn’t stir until it was time for brunch with the Bugaboo crew at Pastis. Another restaurant that lives up to the hype! We each sat at different ends of the table, but somehow all ordered the Eggs Benedict.

After brunch we took in the Highline, a stretch of walking path that over looks the city and the river. It is gorgeous! This is where Jenner so kindly captured this film.

After brunch we headed to the Upper West side for our third film (fourth for trooper Jenner Brown who filmed in Brooklyn before we even arrived to the city!) We took in the Empire State Building, and walked what felt like a hundred miles. We laughed when the Empire State Building security caught us trying to sit down a few times – no sitting allowed! So we were very grateful for the Starbucks next door to recharge and sip lemonades and vanilla bean frappuccinos!

After filming we had a couple precious hours to shop and relax. It was basically the first time we weren’t working and it was much needed! Dinner at the Highline and a good old fashioned sleepover were a welcome break from the crazy schedules!

Our last day in NYC was spent brunching with friends, and a little food crawl at the Chelsea Market. It was all such a blast and we can’t thank Bugaboo enough for the amazing opportunity, for Jenner Brown for coming with us and filming his heart out, and of course our incredibly supportive husbands and kiddos for holding the fort down back at home for a few days.

One more big thank you to Called to Surf, for sending us with some fun new clothes for the trip! Jenna’s citron wedges, Emily’s striped pants, and Nicole’s striped carry-on are all from Called to Surf. Locations in SLC or Provo!

from head to toe: little giraffe