Why I Chose to Bottlefeed – Emily

I remember a few years ago, nervously asking on our social media outlets for women to share their stories for why they chose to bottlefeed. I am proud to say it’s becoming less taboo (at least in the circles I run in), but a few years ago it wasn’t always that way! I was BLOWN away at how many women came forward, all saying the same thing — every time I shake up a formula bottle in public, I feel judged. Some women were crushed by it, some angered, some unfazed, but they all felt less-than. At this point in my life I had my two boys, both exclusively breast-fed: Hayes until I got pregnant with Cal at 8 months, and Cal until 16 months. Besides it hurting like hell for the first few weeks, it came pretty naturally in both situations. So collecting these stories I admit, I felt removed, I just didn’t relate, although I empathized. Oh boy did I learn a humbling lesson with Raleigh! Before I launch into the long list of ways breastfeeding was a struggle and at times a downright fail, I want to cut to the moral of the story first. 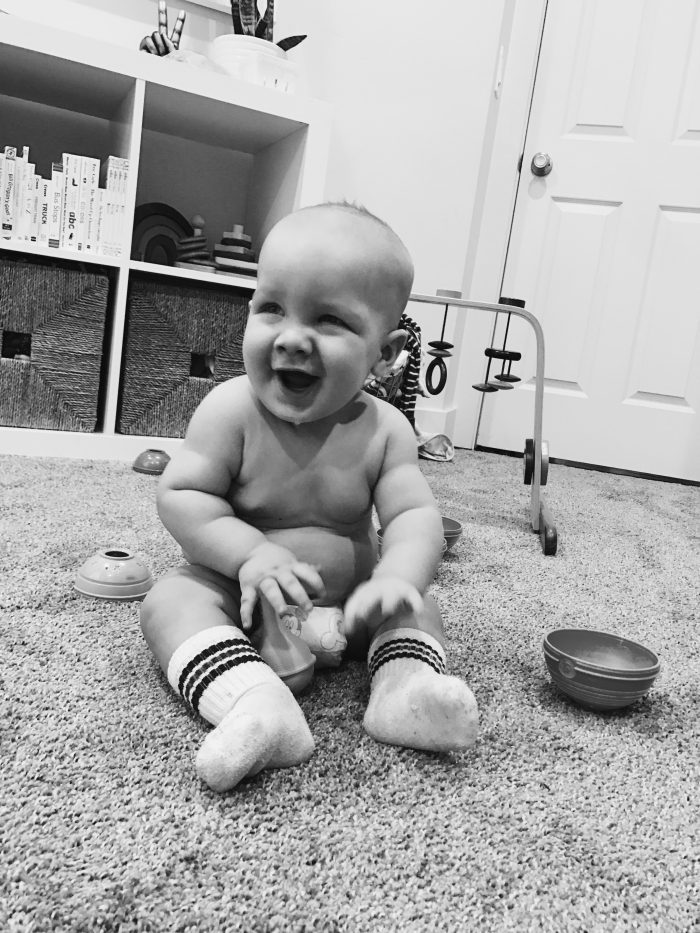 Every time I see a parent struggle with a child in public – whatever it may be – going to town on candy, only eating the fries and none of the chicken, throwing a fit, throwing a punch, saying a bad word. I always remind myself of the giant list of things that parent must have already tried. The countless times they put a plate of veggies in front of their kid only to be told “no!” The million times that parent held and cuddled that kid even when they said “I hate you” and thrashed their legs. Every time a kid is rough on the playground, I think of how many different times that mother asked them to be soft and be kind. All of this to say, we as parents will TRY EVERYTHING, every which way, every angle and direction to achieve a positive result with our kids. And even with all that effort, things rarely, if ever, go the way we want or wish. Let’s add this imagery every time a mom shakes up a bottle of formula, because oh man I know how hard it can be! I just hope that we can all offer the assumption when we might lean toward judging — that parent has already tried every thing, the best way they know how. We are likely catching them in the MIDDLE of this struggle. They invested a hell of a lot already, and they will continue to try new things even after we pass them in the aisle at Target.

So here is my Thomas Edison size list of ways breastfeeding worked against Raleigh and I. Things I tried, things that failed. I’m sure there were mistakes made and things I didn’t think of or did wrong, but I’m just grateful for a healthy, happy baby, ya know?

Jaundice. My third time dealing with it I vowed to not make that same mistake and I supplemented formula off the bat while my milk came in to be sure he could flush out the bilirubin as fast as possible! After I got him home, people were so concerned (but cruel) and said he looked sickly, he looked like a preemie up until about 1 month. Now he’s 24 pounds. He was fine, and he is fine.

Let-Down. Raleigh NEVER cried. Ever. He is the happiest baby and so my let-down was always tied to him actually sucking, versus his cries. It always took a second to get going. He would show his signs of being ready to eat, and I would put him on and wait for the let-down. I am no expert, but I think that was detrimental to my supply as well as the speed that the let-down would come. If he did a cluster feed or needed more, it wasn’t usually there until his typical time spans had passed again. So, when I finally gave in to bottles and they required no let-downs of course he preferred them to working for it at my boob.

Supply. My supply at about a month in was never enough. I would pass Raleigh back and forth from boob to boob literally 4-5 times a feeding praying something more would let-down. I was always drained and he was still hungry. I drank water by the gallons, I didn’t exercise (even thought I was dying to!) I did Lactation tea and bars, pumping, and on and on. I would seemingly make more milk, but I never could seem to catch up! Having three kids, two of which have actual schedules to maintain, it is so hard to devote the actual time it takes to build your supply. It was literally all I did in between life and work, not to mention all that goes into caring for an infant. All I wanted was to hole up in my room and do what it takes, but that wasn’t in the cards!

Thrush. Raleigh and I passed thrush back and forth for literally months. It would come and go away, I would try antibiotics, Nystatin, that awful smurf-y gentian violet. Boiling bottles, nipples, pacifiers. Putting vinegar on MY nips. I mean really.

Clogged Ducts. I am a stomach sleeper and it wasn’t until I had Raleigh that I realized sleeping on my stomach might lead to clogged ducts. It happened a few times and the last time my milk never recovered on one side. Raleigh was 6 months old and I would pump less than an ounce on one side after HOURS of waiting. I finally let it dry up and started breastfeeding him just on the one side. Like my boobs are always lopsided and it’s a little sad!

At this point Raleigh is now 7 months and eating solids, and so huge and happy. All the while I have relied on bottles with increasing frequency simply to keep him full and happy. My milk was never adequate, and I had to let the guilt of that go. My milk might not be adequate, but I am! I am more than enough as a mom, even if my milk lagged! I am SO grateful for bottles, what would I have done without them?! He would’ve been MISERABLE, it was miserable and I fought so hard for the supply that I was able to keep. Now I am a one-boob, 1 or 2 feeding a day breastfeeder. Even then sometimes I have to pump it off and give it to him in a bottle because he’s not into the boob. And the rest of the time Raleigh takes a formula bottle, the majority of time! He is smart, healthy, and social and has the best skin and smells amazing and and loves me best. And best of all, he’s FULL!