Audiobooks have really been pulling through for me this pregnancy! Here’s the last few I’ve been listening to and my reviews! Spoiler alert: read the first and maybe skip the other two unless they sound up your alley! 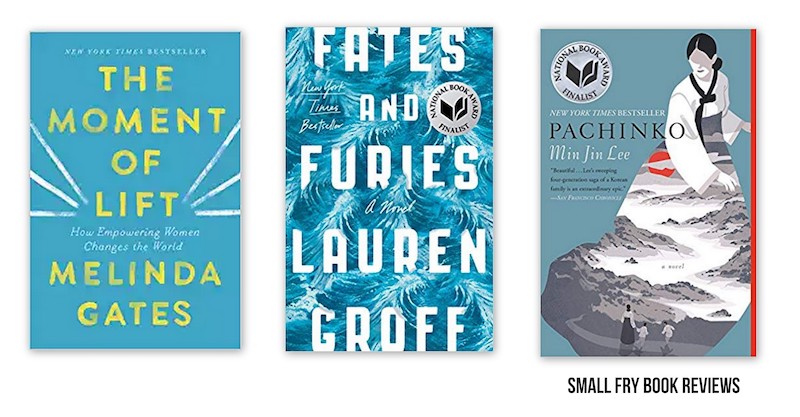 THE MOMENT OF LIFT: How Empowering Women Changes the World- Melinda Gates

It’s not often that I fist pump while reading. I did a few times while reading this amazing book. Gates did extensive research, data collection and has traveled the world seeing and hearing from those with firsthand experience. She offers amazing stories, both personal and from her travels, she weaves them with data and actionable items. She shares evenly distributed heartbreak and victory. Equal amounts of  what has been accomplished, and what we still need to do. SO well done and everyone should read it. Truly. I’m ready to quit all my jobs and work for Melinda and Bill. I’ll share a couple quotes that I loved (the whole last bit about equality and connection was so good I can’t even paraphrase.)

“What I realized is that by trying to fit in, I was strengthening the culture that made me feel like I didn’t fit in.”

“Opportunities have to be equal before we can determine if abilities are.”

This one had been on my to-read after I heard it was Barack Obama’s favorite book that year, 2015 and also a National Book Award finalist. It is the stories of the marriage and early lives of Lotto and Mathilde, told first from Lotto’s perspective and then Mathilde’s. It is an over-exaggerated, very dramatic, but also hyper-focused story on just these two broken individuals and essentially how their baggage effects their marriage. Almost a cautionary tale that promotes being open, honest, and vulnerable in our relationships… or else.  We read it for a book club which always heightens my sensitivity toward the content because I am thinking about how the other women are taking it, ha! But I think it’s safe to say regardless, there was a LOT of sex. Abuse and sex abuse, prostitution, language. I will say though, the book club discussion was really awesome!

Since Mathilde is originally from France I took that as excuse to get patisserie items from our local bakery Fillings & Emulsions (everything is delicious there!!) Almond croissants, scones, kougin amann, pain au chocolat. I also did Jillee’s crock pot hot chocolate since none of us drink coffee. Super yummy!

Remember Homegoing? You can read my review on this link, but the highly acclaimed, award-winning Pachinko is similar in structure. Pachinko covers several generations of the same family told over decades from many perspectives. And similarly to Homegoing it shows how systemic inequality occurred and shifted over these generations for Koreans, both from the inside and also done from the outside by the Japanese and others. Maybe because Homegoing was such a powerful read for me, Pachinko didn’t quite catch me like that. It wasn’t as interesting or enveloping although I did learn a lot. Content: occasional sexual content, prostitution, abuse.