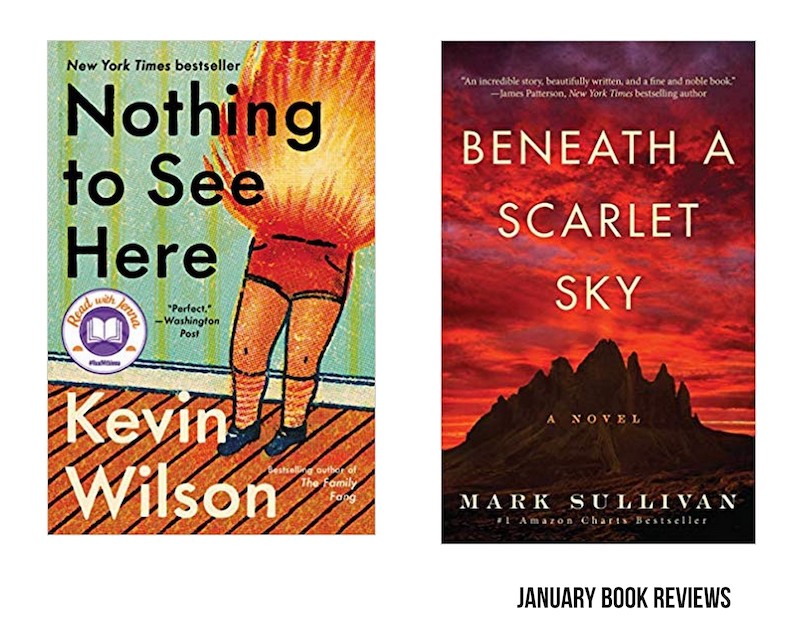 NOTHING TO SEE HERE – Kevin Wilson

This book is SO funny. Laugh out loud, dry humor, catches you off guard but also makes you think. I don’t even want to blow the plot I feel like the less you know the better. One quote I loved was “They didn’t want the world to burn, they just didn’t to be alone in it.” Poignant for any parent who hasn’t known how to level with a child. But also on a more grand scale, so much general humanity to learn from. I LOVED it! 4 STARS– Language, but otherwise super clean.

BENEATH A SCARLET SKY – Mark Sullivan

This is a WW2 book written from the true story premise of real Milanese partisans. Lots of new angles of the WW2 story that I haven’t read about which is hard at this point considering how much WW2 literature is out there. Spies posing as Nazi drivers, guides that smuggle Jews out to Switzerland. All super cool, but could’ve used a hefty editing job. It’s just too long! And I know I am super ornery and pregnant but the love story parts were a little eye-roll worthy. Sullivan used musical metaphors to describe and it was just too much for me right now. Ha! Otherwise really interesting! 3 STARS!

Hayes has been reading this series since Christmas with me and on his own and he is plowing through them! I love that it’s teaching him about history in an exciting way, it’s opening up for lots of good conversations that I don’t normally get from him by asking about school. It’s not super graphic but doesn’t sugar coat some things either, so if your young reader is sensitive might be something to be aware of.