Well it’s not as impressive (or sad?) as 8 books, but I was still able to finish 5 books for September! Also finally connected my new library card (I lost my wallet and had also moved) to Overdrive which is a MUST for how much I’ve been listening to lately. Here they are in no particular order: 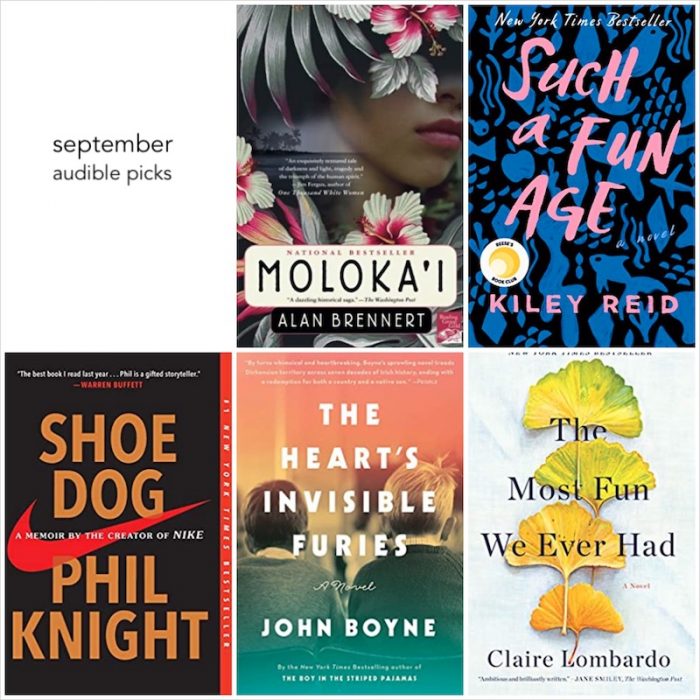 The Most Fun We Ever Had by Claire Lombardo — If you’re a fan of This is Us or Parenthood, you’ll love this! The story of a husband and wife and their 4 very different daughters. It hops back and forth through time, weaves in and out of each family members stories. Pregnancy and loss, adoption, death, infidelity, troubled kids, and the love of two people that sustains them through it all. The parents would joke in harder times that it was “the most fun they ever had.” and I won’t blow the story but that line will make you laugh and sob. It’s quite long so I viewed like a series instead of a movie. I tend to get antsy with long listens so I didn’t try to power through and just took it in smaller doses. Content Warning: the parents have a very active sex life so there is a lot of that. 4 STARS!

The Heart’s Invisble Furies by John Boyne — If I was feeling like there was a lot of sex in The Most Fun, I stand corrected after reading this book. But how do I stress that it should NOT deter you from this book. It’s one of my favorite books I’ve ever listened to. The narrator should get a Grammy, he is unreal!! Starting in 1940’s Ireland it covers the life story of Cyril Avery. He struggles with his sexuality, shame, and secrecy nearly his entire life thanks to the iron grip hold the Catholic church had on Ireland. Raised unconventionally by adoptive parents, he can’t seem to find belonging anywhere except with his best friend Julian. I can’t even tell you another word because the way the story unfolds dazzled me. Boyne sets up the story in such a way that propels you through the plot, the sadness and horrific events, knowing redemption will come. Another long one, but I wouldn’t skip a single word. I laughed out loud nearly every chapter, and cried several times. 5 STARS!

Shoe Dog by Phil Knight — The memoir of Phil Knight, the creator of NIKE. Earlier this month I was having some business related woes and reading this couldn’t have come at a more perfect time. I had no idea how much Knight struggled to make NIKE profitable, let alone the monster it is now. For decades! Their early days of trailblazing and scrapping was fascinating to read about. Reading about their company culture was laugh out loud was hilarious. A total boy’s club and truly untenable for woman to work at, it would just never slide in 2020, but it worked for them in the 70s! I learned so much from this book, but I took “Fail Fast” to heart. Knight’s mantra of people over business was another theme I loved, and the way he saw fate or serendipity in everything, in turn making him grateful, humble and so likable. I knew I liked the Cortez sneaker, but now it LOVE it. 😉 A must for any entrepreneur, but fascinating even if you’re not! 4 STARS!

Such a Fun Age by Kiley Reid — this book came out this year and has already garnered high praise! I think many of (I hope at least) can agree that we’re fighting to be anti-racist. We’re aware of the many ways that racism still exists today, systemically, socially and more. So this was written for those who are a further evolved in that way. It’s not trying to be educational, it’s storytelling. Also, explores the gap between “millenials” in their 30’s and 20’s which hits close to home. I’d say it’s more of a beach read, entertaining, interesting, if you can read a physical copy of it. The audio version was a little troublesome for me. There is constant kid-talk and it’s a little cheesy and cloying when you’re listening. THREE STARS!

Molok’ai by Alan Brennert — I had no idea about this time in history and it was crazy to read about! In the early 1900’s the Hawaiian islands experienced and outbreak of leprosy. Knowing so little about it, any citizens caught with the disease were sent to the island of Molok’ai. This is the story of SEVEN year old Rachel sent on her own to make her way in this new place with a deadly disease. I loved learning more about the culture and the history of that time. It is LONG but fascinating and sweet.